The State General Assembly passed legislation sponsored and supported by the 9th District Legislative Delegation that would designate the week of September 17 through September 23 of each year as “Constitution Week” in order to remember and honor the signing of the Constitution of the United States of America on September 17, 1787.  This would correlate with the national week as established by Congress in 1956. 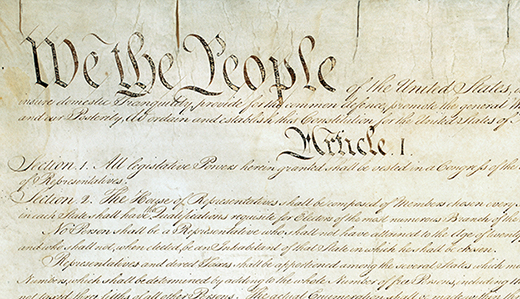 The joint resolution (AJR-72) supported by Senator Christopher J. Connors, Assemblyman Brian E. Rumpf and Assemblywoman DiAnne C. Gove passed the Senate in November of last year.  Having passed both Houses of the Legislature, the measure heads to the Governor’s desk.

The 9th District Delegation issued the following statement subsequent to their initiative having passed both Houses of the Legislature:

“Raising public awareness, especially among younger persons, about the important role the U.S. Constitution plays in the lives of American citizens is incredibly important. It’s timely that the Assembly took up this measure as our country, unfortunately, finds itself in a highly partisan environment in which our differences too often eclipse our common values as Americans.

“Celebrating the U.S. Constitution can serve as a confirming reminder of how America became exceptional by not only establishing but preserving liberty, justice, and opportunity.  Residents can also take greater pride in the contributions of New Jersey’s signers of the U.S. Constitution, namely William Livingston, David Brearly, Jonathan Dayton, and William Paterson.”