TOMS RIVER – Freeholder Virginia E. Haines is poised to become the first woman to lead Ocean County in 40 years, when she is expected to be appointed director of the board in January.

Haines, 72, of Toms River, has been on the Board of Freeholders since 2016. She is only the second woman to serve on the five-member panel since the county was founded in 1850. Hazel Gluck, the only other female freeholder in its history, was on the board for one term in the late 1970s — serving as director in 1978 — before she was elected to the state Assembly one year later.

When Ocean County Republican leaders drafted Haines nearly three years ago to fill the unexpired term of former Freeholder James F. Lacey, she arrived with perhaps one of the most impressive political resumes of any freeholder in the state.

From 1994 to 2002, Haines was in charge of the New Jersey Lottery, overseeing a staff of about 100 and more than $1 billion in annual ticket sales as its executive director.

“The lottery is a very good job,” Haines said. “Because you’re giving money away to people and you always got to talk with them about what they were going to do with it. That was fun.”

Then-Gov. Christine Todd Whitman tapped Haines for the post six months after Haines was elected to a second term in the state Assembly, where she represented the 10th Legislative District in Ocean County.

While in the Legislature in the early 1990s, Haines was one of three Jersey Shore lawmakers who established the “Shore To Please” specialty license plates featuring Barnegat Lighthouse on Long Beach Island. The revenue generated from motor vehicle registration fees is still used to fund projects to prevent beach pollution and offset the clean-up costs of environmental emergencies.

“Right after the ‘92 storm, the state didn’t have any money for Shore protection,” Haines recalled. “We wanted to create a dedicated revenue stream for things such as pumpout stations, ocean water testing by the state Department of Environmental Protection and stormwater runoff management.”

A lifelong Ocean County resident who grew up in Lakewood, “Ginny” Haines said she caught the political bug from her parents when she was a teenager. Her mother and father were both active in local Republican politics.

Later, she married a politician — M. Dean Haines, who would become the mayor of Barnegat at 23 and later Ocean County clerk at 30.

“I was always involved in him running for office and running non-profits,” Haines said. The couple divorced years ago but Haines kept her married name.

Decades before she would become a freeholder, Haines worked for Freeholder John C. Bartlett Jr. after he was first elected to the board in 1979 and later for state Sen. Robert W. Singer, R-Ocean.

“Then I was selected to be clerk of the General Assembly and that’s where I really learned the most,” she said, which later prompted her to run for a seat in that chamber in 1991.

Today, highlights from her political life are illustrated in the form of framed photographs around her office — which include her standing with three presidents: Gerald R. Ford, George H.W. Bush and the current occupant of 1600 Pennsylvania Avenue.

A photo of her and her nephew Dillon, with President Donald Trump and first lady Melania Trump sits prominently on her desk. It was taken at a reception at the White House just before last Christmas.

“My nephew loves President Trump,” Haines said. “He’s got the shirts and the MAGA hat,” a reference to the campaign slogan “Make America Great Again.”

Despite a schedule for the RNC that involves frequent trips out of state on party business — which she often pays for out of her own pocket — Haines has developed a reputation as one of the hardest-working freeholders on the board.

She starts her day early, before the sun rises, at a local gym. Weeks can pass before Haines allows herself a weekend off from official business and political engagements.

“I talk to so many people and I try to go to as many things as I can,” Haines said. “I try to learn as much as I can.”

“She is sincere and hard-working,” said Sheriff Michael G. Mastronardy, a fellow Republican, who explained that Haines sought to immerse herself in all areas of the county government’s operation from the moment she was sworn into office on Jan. 27, 2016.

Virginia Haines listens as an Ocean County Freeholders meeting gets underway. She is expected to become first woman to lead the freeholders In 40 years. (Photo: Peter Ackerman)

“She is dedicated to providing good services and good government to the residents of Ocean County,” Mastronardy said.

The fact that more women have served on the U.S. Supreme Court than on the Ocean County Board of Freeholders is not lost on Haines, who still describes politics as “a man’s world.”

That may be an old-fashioned perception for 2018, but from the perspective of a woman in what is one of the most conservative counties in New Jersey, with a median age of 42.8, it has the virtue of still being true, observed Haines.

“I’ll call it the ‘man’s world,’ because it pretty much is; you’re always going to have more men than women (in politics). So, it is a man’s world,” she said.

As Haines spoke in her office on the third floor of the Ocean County Administration Building in downtown Toms River this past Tuesday, Freeholder Gerry P. Little, the current director of the board, knocked on the door and stuck his head in.

“This may be premature; we may not have the votes (to appoint you director),” Little said, before adding: “I’m only teasing.” 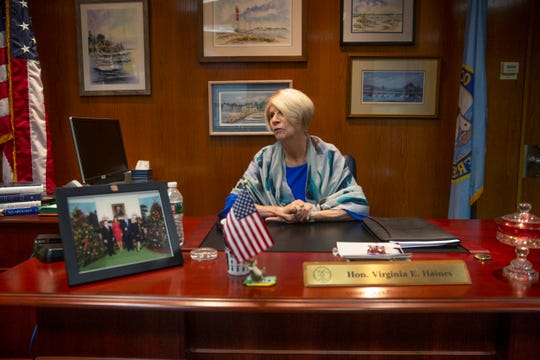 Ocean County has come a long way from the days when a voter or even an impertinent reporter would ask a woman candidate for office who was taking care of her husband and their children back home, the freeholder explained.

Nonetheless, she personally never felt discriminated against because of her gender, Haines said.

Moreover, she said there should still be room to appreciate that men and women may have their own distinct perspectives on any given issue.

“I think as a woman, we look at things differently and we do have — I don’t want to say more compassion — but we are known to be more compassionate than men are,” the freeholder said.